It’s amazing how, after a day in one of the most wild places that I have ever spent time in, covered in rainforest gunk and fresh bug bites, I find myself ten minutes later basking in air conditioning and enjoying the benefits of electricity and a wireless connection. The ten minutes, of course, included a lightning-quick shower (quick not by preference, but because of the frighteningly cold water). It’s a little strange writing following such a sudden and dramatic change, but I’ll gladly take that challenge.

Here’s a brief overview of events leading to the present.

After arriving in Quito late Thursday night, I headed right back to the airport in the morning and met up with Diego, co-manager of Tiputini, and a few student groups. We took a small plane to Coca (30-40 minutes), then took a motorboat down the Napo River to an oil company checkpoint (a little hut with an x-ray scanner, not unlike that at an airport). After loading up our bags, we took a vehicle (an odd truck/trolley hybrid) to the Tiputini River, where another motorboat was waiting. The trip down the Tiputini River was a good one. We saw several large birds, capybaras (the world’s largest rodent), pink river dolphins, and red brocket deer. The deer seemed to be harboring a broken leg (hence the closeness of the shot below). After allowing Diego to touch it, the deer swam away awkwardly and unfortunately will probably become easy prey for a large carnivore. After about an hour and a half, the rain hit and didn’t seem to end for most of the night. I used a few garbage bags to protect my luggage and the equipment inside but had nothing to cover myself and, after a few minutes, had to give up trying to duck from the rain. I got soaked. Here are some photos from the boat ride. 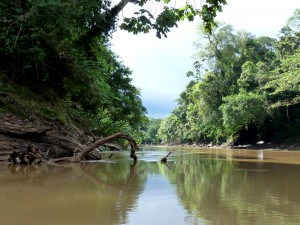 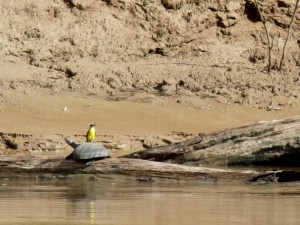 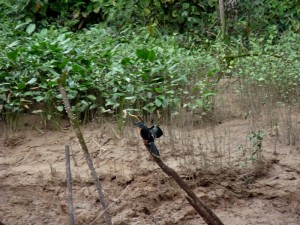 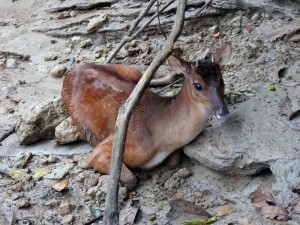 Today, I spent the morning tracking woolly monkeys. Five minutes into my hike, while I was preoccupied with watching the canopy, I walked right into a spiderweb (a thick one too), felt it envelop my head, and spent the next minute jumping around, picking the threads out of my hair, and fighting off the spider that I had angered in the process. I can’t think of a better welcome to the rainforest. With that spirit in mind, I decided to start a new blog feature: “Things I don’t miss (but had forgotten about).”

Things I don’t miss (but had forgotten about): Spiderwebs.

For the most part, they are tolerable. Most spiderwebs are small and will either get caught in our clothing/headwear or can be casually peeled off the skin but larger spiderwebs can be enormous, easily covering the width of a trail. Careful hikers avoid these. With my head often turned to the canopy, however, I find myself constantly running into these and feeling each individual thread as the spiderweb wraps around my face. It’s not so much the feeling of the web that bothers me; instead, I get freaked out by my not knowing which spider I had just annoyed. Is it large? poisonous? Are there many (some spiders are social)? I don’t generally consider myself afraid of bugs, including spiders (I’ve been bitten by plenty now), but that moment of not knowing continues to haunt me.

All of that aside, it is truly amazing to be back in the forest. Today was a “half day” (half in the field, half in the lab); but sitting around the lab has me itching to get out again. Halfway through this blog post, a troop of squirrel monkeys waltzed right past the lab and some stayed still just long enough for me to grab my camera and snap some photos. I’ll conclude this post with those pictures. 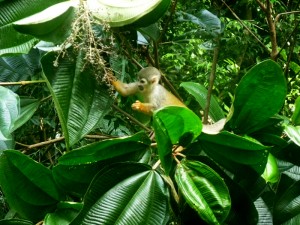 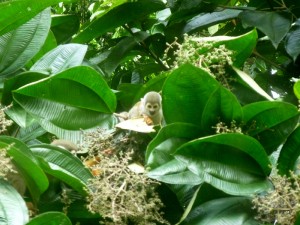 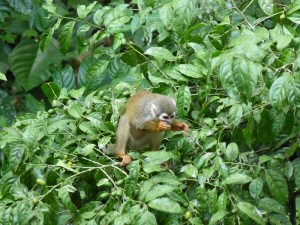