Some exciting popular science coverage of my research (coauthored with Christina Bergey) today in Gizmodo!

Poop may be the key to studying the most elusive animals on Earth: https://t.co/pfRv2uJpny pic.twitter.com/T4WzoI0Mkd

As a field primatologist, I have no shortage of incredible wildlife experiences. Here is my photo of an aardvark, featured by Project Noah as their Spotting of the Week!

From A to Z, this awesome aardvark from Zambia is our Ranger-selected Spotting of the Week! http://t.co/0lJb37SnuA pic.twitter.com/j5p8FsJ4C2

As I’ve hinted in the past (e.g., here and here), I really love a good map. Lately, a few colleagues have approached me for help with mapmaking. Despite each person’s focus on a different region or topic, I’ve found that the same small set of free online resources have usually proved to be equal to the task.

Generally, my approach is to collect high quality vector data for map features such as political boundaries, rivers, or roads. These are often available for the GIS community in shapefile format or some other widely supported vector format. I then plot the data in R using the maptools package. R is more than capable of putting together beautiful maps and is far more lightweight and efficient than dedicated GIS programs. It also runs on every operating system. For Mac/Linux users, no need to fiddle with virtual machines, dual boot machines, or other people’s machines just for access to ArcGIS!

Here are some websites to bookmark:

Natural Earth is usually my first stop for free general-purpose spatial data for cartography. It offers global cultural and physical vector data at three different scales, as well as raster data at two scales. For certain datasets, multiple options are presented, giving more control over the features actually downloaded. Best of all, the features are quite up-to-date. One of my major complaints about mapping in R was the datedness of the data included in widely used packages such as maps and maptools, both of which use the CIA World DataBank II, which was last updated in the 1980s!

DIVA-GIS provides a portal to free spatial data hosted around the web. I find the country-level data particularly useful and use it often, particularly when my focus is on one or a few countries.

Protected Planet provides very good vector data for protected areas of the world. The global dataset is available for download but is enormous at nearly 3 gigabytes. It is usually more useful to download data by country.

I focus on vector data for my cartographic needs, but on the rare occasions when I need raster data I turn first to the Global Land Cover Facility (GLCF) at the University of Maryland, which provides useful raster data including satellite imagery and earth science products derived from satellite imagery.

Unlike the other resources on this list, ColorBrewer does not provide any data. It does, however, offer excellent guidance for color usage in maps. The user can specify her data nature, pick a color scheme, and generate a set of colors tailored to her purpose. She can even filter only colorblind safe, printer friendly, or photocopy safe color schemes. Colors are provided as Hex, RGB, or CMYK values.

To demonstrate how easily and quickly maps can be put together, I decided to create a map of South American rivers. To do this, I downloaded global national borders (110m resolution) and global rivers (110m, 50m, and 10m resolution) from Natural Earth. I then plotted all the features in R.

Next, I decided to create a map of Taiwanese national parks using global national borders (10m resolution) from Natural Earth and protected areas of Taiwan from Protected Planet.

We had the enormous privilege of hosting the Ethoinformatics Working Group 2013 meetings at Washington University last month in St. Louis. Sponsored by the National Science Foundation and organized by Tony Di Fiore, Tom Igoe, Jane Phillips-Conroy, and myself, the meetings brought together primate field researchers, data scientists, and Washington University librarians for three days of discussions about database management, data collection, data archiving, and best practices for the future.

Many thanks to all who attended, and to the many folks at Washington University Libraries and the Department of Anthropology who helped with organizing the event.

Pinkerton is a remarkable canine research assistant working in China with my good friend Joe Orkin. Over the past couple of years, Pinkerton has assisted Joe as a scat-detecting dog specializing in gibbon scat. Training dogs to detect scat is hard work and involves a close special relationship between researcher and canine. The results, however, are worth it. With his superior sense of smell and his unfailing worth ethic, Pinkerton finds precious samples the rest of us would have no chance of detecting! 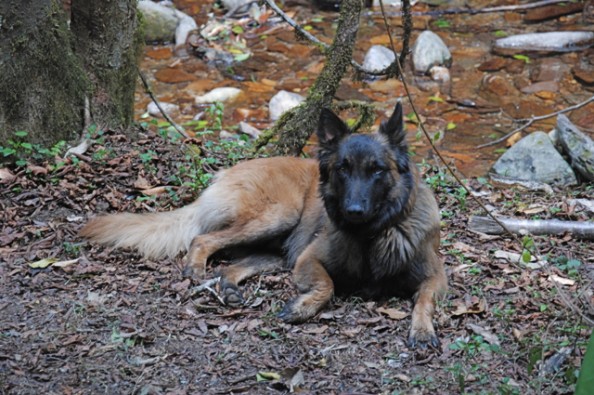 Joe’s fieldwork is now drawing to a close and Pinkerton is nearing retirement. Unfortunately, however, transporting dogs halfway across the world is expensive and Joe needs your help sending Pinkerton to a well-deserved retirement in the U.S.A.