Monday marked the arrival of Tony, my undergraduate advisor, and the first presence of another human on the monkey project here at Tiputini. While I have hardly been alone–the volunteers, managers, staff, and students have been tons of fun–it is refreshing to finally have somebody around to talk monkeys and to work with in the field. That said, things started off a bit poorly on Tuesday, Tony’s first day back in the field. While following behind him through a crowded portion of the forest, I ducked under a fallen tree and ran into a wasp nest that Tony had gracefully knocked over directly into my path. It took eight or nine stings, including several to the face, for me to process what had happened and to hear Tony yelling, “Run away Kenny, run away!” I ran in circles while Tony tried to find a safe area for me to cross, getting stung himself in the process (“This way! . . . Nevermind!”). While the wasp stings–my first ever at Tiputini–were pretty painful, they are trumped by the conga ant sting that Tony experienced earlier that day (and narrowly avoided later when I brushed a different conga off of my arm and into his boot). Needless to say, we were both smarting with pain by the time we finally found monkeys.

Tony’s arrival also sparked a marked improvement in my poop-collecting abilities as I’ve been picking his mind every chance I’ve had for tips. Here are a few key findings:

Gross story. I got rained on today by monkey poop and, at one point, felt some of it hit me in the left eye (see number 4 above). I spent some time trying to cry it out, but couldn’t shake off a sneaking suspicion that some of it was left in my eye. After getting back to camp, I switched out my contacts and tried to wash the poop out, then stopped thinking about it. While writing this entry, however, I noticed that I was picking out an unusually copious amount of gunk from the inside of my left eye, then got a little grossed out when I remembered what had happened earlier. Tony laughed when I told him this, but I’m not convinced that I’ll avoid an eye infection these next couple days.

Speaking of Tony, I killed a mosquito resting on his forehead today. I’ve done that before, but had the strange thought today that I might be one of the only students ever to have the opportunity to slap his or her major professor in the face and receive a “thank you” in return.

Things I don’t miss (but had forgotten about): Spiny plants
For obvious reasons, Tony calls them “bitch palms,” but however you may feel about them, they are responsible for the twenty minutes per night that I spend picking splinters out of my body. They also often get caught up in clothing and induce a good bit of picking and peeling to get off. Getting gored is also frustrating given that I intend no harm towards the plant, which presumably grows spines in order to ward off potential feeders and/or parasites. Attacking me, I think, is therefore exceptionally inconsiderate and makes traveling through the forest unnecessarily difficult and painful. “Bitch palms” indeed. 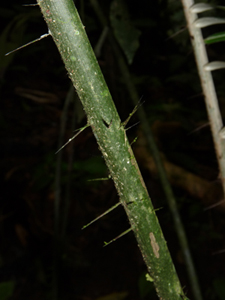 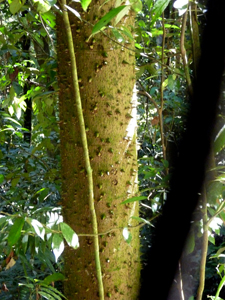 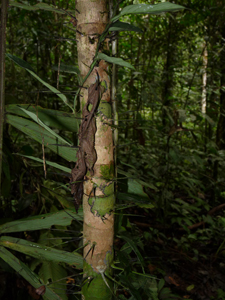 Before I sign off and head off to bed, I leave you with a variant of Tony’s favorite parting words for the field (and the source for my title):

“May the monkeys be visible, may the data be wonderful, and may the poop be plentiful.”

2 Responses to . . . and may the poop be plentiful